Liz Woolley, an Oxford based historian asked me if I would write some music for a short documentary film currently being made in South Oxford .

It is part of a community project, looking at the lives of 66 men who were living in the area known as Grandpont, just south of the river Thames.

They were all killed in the course of the 1914 /1918 war. A plaque commemorates them in the church of St Matthew in Marborough Road.

The project which has many sides to it, has involved discovering where these guys lived, what they did during their short lives, and also tracking down living relatives of theirs. Info on the ongoing project is here and also here.

The short documentary film will be finished in May 2016, produced and edited by Simon Haynes; it will be shown at Oxford Town Hall and at venues across Oxford during 2016.

For the music commission, there were different possibilities: there are lot of well known songs directly related to war (It’s a long way to Tipperary etc.), and also included in the film will be bugle calls and a patriotic song written by an Oxford man.

However, I wanted to put to one side the martial and the heroic, which seem catered for more than enough when it comes to wars past and present. For me it seemed that  engaging with every-day music of the time was relevant in celebrating the lives of these people. I found a song recorded on cylinder in 1914 by the Scottish singer Daisy Taylor, called Popsy Wopsy (digital transcription by Tim Gracyk). I got really hooked on the delightful tune and the punchy lyrics. 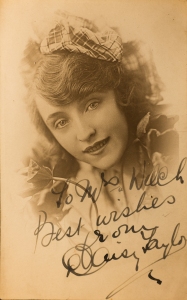 I wrote a set of short pieces for three cellos based on fragments of the melody: a choral-like piece, a piece about fragmentation and transition into a world of memory, and also a straightforward fairground-like arrangement of the chorus of the song.

The paintings of Paul Nash came to my mind also. So for this music, I thought of a sort of paralysis between mud and sky, but pulsating with a life which can only be filled by memories.

Johanna Messner, Rowena Calvert (Cavaleri String Quartet), and Nicholas Roberts (Coull String Quartet) played the pieces and I recorded them on the 30th November at the Church of St Matthew, on a cold morning. They were amazing in every possible way in making the music come to life (and in braving the cold!).

While they were rehearsing, Liz came in with Jim Tallett, who is the nephew of Horace Tallett, one of the ’66 Men’. He is 83, and used to be a jazz musician. He was chuffed that this was happening, was following the score while they rehearsed, and said how much he liked the music. He said it reminded him of Arvo Pärt!

So here is a piece made of the various sections, strung together as one. (mixed for hi-fi or good headphones, but not for laptop speakers)

One thought on “MUSIC FOR ’66 MEN OF GRANDPONT’”